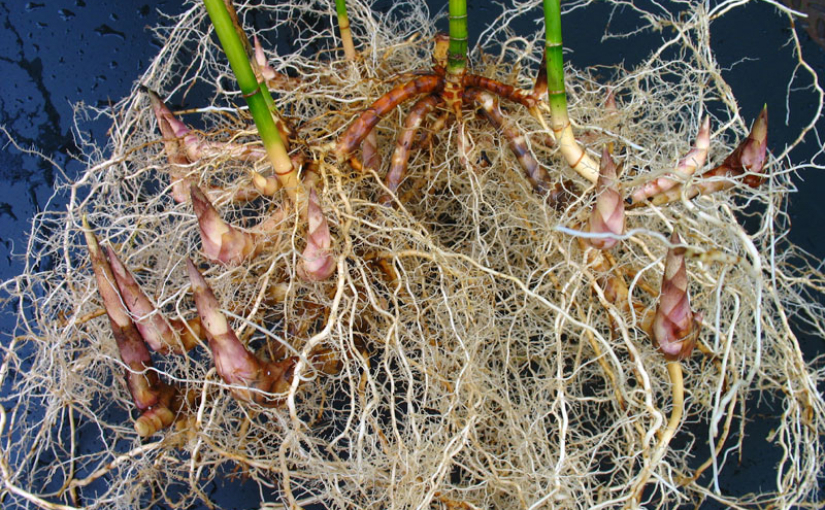 Two French philosophers, Deleuze and Guattari, wrote about how in modernist, western capitalist thought, knowledge is seen to be linear and predictable. They use the metaphor of the tree to represent linear thinking, where knowledge is traced through the branching out, in straight lines, from the roots to the trunk to the tips of the branches. In schools, knowledge is represented in this way as curriculum in prepared in age-related stages, and curriculum areas are boxed and separate. These key learning areas are progressively built on, through each stage. The student is assessed as to whether she meets outcomes. Learning is viewed as a progression along recognizable paths where the student builds a logical tree of knowledge from which to grow and develop.

Deleuze and Guattari offer an alternative concept to understand knowledge – the rhizome. The rhizome is another botanical reference however it’s movement is different to the tree. In botany, a rhizome is a plant that does not have a branching root ball, but rather, it is more like a bowl of spaghetti. Rhizomes don’t have a main root, all of the roots of a rhizome are equally connected. Rhizomes are easily propagated because the root ball can be pulled apart to grow new separate plants. Rhizomes send off shoots to grow a new plant. They adapt very easily. So the metaphor of the rhizome is quite different to that of the tree. In learning terms, the rhizome is synonymous with Unschooling because the way that learning unfolds is so distinctly different to how children are expected to be taught and to learn in schools.

Because unschoolers are not limited by a curriculum or by having to meet particular learning outcomes, then suddenly the universe becomes the curriculum and living life is the pedagogy. There are no limitations on who, what, when and how learning can take place. There are also no boundaries. For instance in school, the curriculum contains information into manageable chunks. Once the topic has been taught to the satisfaction and determination of the teacher (influenced also by the time allocation), the teacher moves on to the next lesson plan, even though there would be multitude other details and connections and ideas possible to include in the topic but that couldn’t be included purely due to practicality. These limitations are much less present in Unschooling. An unschooler is able to follow leads and links, switching and moving through and across multiple Key Learning Areas (KLAs) (and beyond recognized KLAs) as they learn. Deleuze and Guattari use the conceptual term ‘line of flight’ to refer to the way a rhizome sends off shoots. In Unschooling, a line of flight is easily followed as there are no restrictions on what can be learnt. For example, our 7yo was playing a game of elastics singing the song “England, Ireland, Scotland, Wales…” which then led to looking in an atlas containing odd facts and seeing that in Wales, there is a bronze statue of Charlie Chaplin. This then led to looking up Charlie Chaplin movies on YouTube and a discussion about old movies and how they were made. Learning that the film clips we were looking at were about 100 years old, our 7yo realised that it was around the time her great-grandmother was born. After watching the Charlie Chaplin movies, we then switched to Mr Bean shows which proved to be hilariously entertaining for the 7yo in question.

These lines of flight, as the child follows leads and links, is how Unschooling is practiced most of the time. The table below gives some examples of differences between understandings of the linear model of learning and the rhizomatic model of learning. 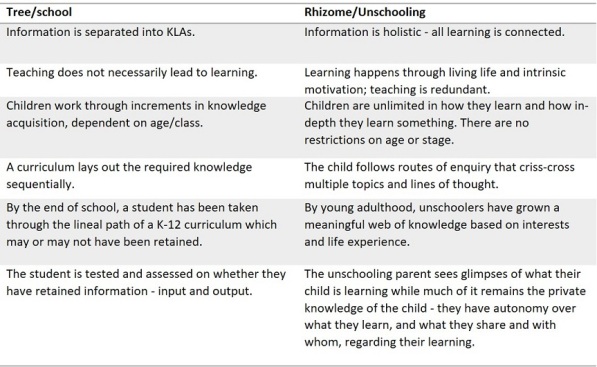